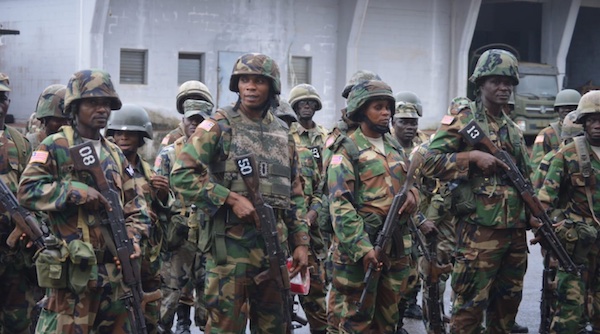 … “If you decide to take the law into your own hands (disregarding the rule of law), regardless of your current or past status or affiliation, and if the LNP can’t control your actions and/or is overwhelmed, we will execute our constitutional duties,” Says Major General Johnson.

The Armed Forces of Liberia (AFL) has warned that they may be forced to execute their ‘constitutional duties’ to police the country’s hard-won peace if the Liberia National Police is unable.

According to AFL Chief of Staff, Major-General Prince Charles Johnson, III, the army will not preempt by going ahead of the police but, when the situation escalates and the police can no longer handle it, they will step in to restore law and order.

Johnson referenced the 2008 New Defense Act, which he claimed gives the military the right to support joint security efforts aimed at ensuring there is peace and that the rule of law is respected, followed and obeyed.

“The caveat is just simple. The Constitution, Article 85, [and] if you go to the 2008 National Defense Act that repealed the 1959 Act of the military, chapter 2 Section 2.3 (E)…there it states the duties of the Armed Forces to support National Security,” Johnson posted on the Ministry of National Defense Facebook page.

“A caveat for whosoever may feel or is disenchanted as we approach the 2023 elections to use the court system as was seen in the 2017 Presidential and 2020 midterm Senatorial elections,” he said. “If you decide to take the law into your own hands (disregarding the rule of law), regardless of your current or past status or affiliation, and if the LNP can’t control your actions and/or is overwhelmed, we will execute our constitutional duties. We will not allow anyone or a group of people to obstruct our hard-earned Peace and Democracy. We will support the LNP and relevant agencies to protect key installations where necessary.”

The warning by the AFL Chief of Staff was made upon his disclosure that he has received multiple text messages from people at home and abroad, asking him to stage a coup since President George Weah is out of the country. According to him, the requests come from people in Liberia and the United States, inciting him to stage a coup, though he has denied those suggestions.

“[Rest] assured that the army under my command will not engage in acts that will derail the peace and democracy of Liberia,” he said.

Johnson’s revelations were made just as the police yesterday announced that it was investigating four individuals in connection with violence that occurred on the Capitol By-pass on December 5, between two rival political groups.

The incident began when several people gathered at the Voice of Liberia radio station to throw obscenities at Lewis Brown, a member of the Alternative National Congress who had gone there to promote a scheduled protest action against the George Weah administration. Brown’s supporters retaliated, resulting in violence between the two opposing groups.

The police however intervened swiftly to calm the situation and escorted Brown to safety.

The government has however condemned the act and emphasized that it will not condone any such level of intolerance, especially leading up to next year’s elections.

“Freedom of expression,” the government said in a release, “is a fundamental precept of any functional democracy and the government will therefore do all in its powers to guarantee this right for all — within the confines of the law — irrespective by whom it is practiced.”

Meanwhile, the Army Chief of Staff added that the army will not sit and watch the country’s hard-earned peace and democracy be obstructed; as such, they will be forced to come in and police it.

Johnson, however, noted that the army will not revert to what happened in 1980 when men enlisted in the army overthrew an elected government. He assured Liberians that this would not happen under this leadership.

“That is to say we allow democracy to prevail and that should be through the ballot box or we use the Constitution through the courts. The Army will not revert to what happened in 1980. That will not happen under this leadership,” he said.

“We support peaceful assembly or rally. That is provided for under the Constitution. We will not allow anyone or a group of people to obstruct our hard-earned Peace and Democracy and we will support the LNP and relevant agencies to protect key installations where necessary.”

The Justice Minister, COS Johnson said, is now meeting with relevant people to allow the Collaborating Political Parties’ planned December 17 protest to go ahead but, when the rally turns violent and the police cannot handle the situation, the army will be on standby to support the Police to restore law and order.

“What we are saying to people is, let’s use the rule of law. Let the Liberian people know that under this leadership, we know our work and we understand the context of which we can come in and when the need arises, we will support the Liberian Police like we did for the June 7 protest. You did not see us. We were in our barracks but we were monitoring the situation just in case. This caveat is not for a specific group but for all.”

The June 7, 2019 protest took thousands of Liberians to the streets protesting against the high cost of living in the country at that time.  The protestors then called on President George Weah to live up to his campaign promises or leave office for the needed changes yearned to come through.

“We support peaceful assembly or rally. That is provided for under the Constitution. I think people should be allowed to assemble peacefully to voice what they have to say but when the rally turns violent and Police cannot handle the situation, the Armed Forces of Liberia will always be on the standby to support the Police to restore law and order,” Johnson added.

He added people should use the Courts to settle issues rather than disturbing the peace that the country has longed for and achieved almost twenty years ago.