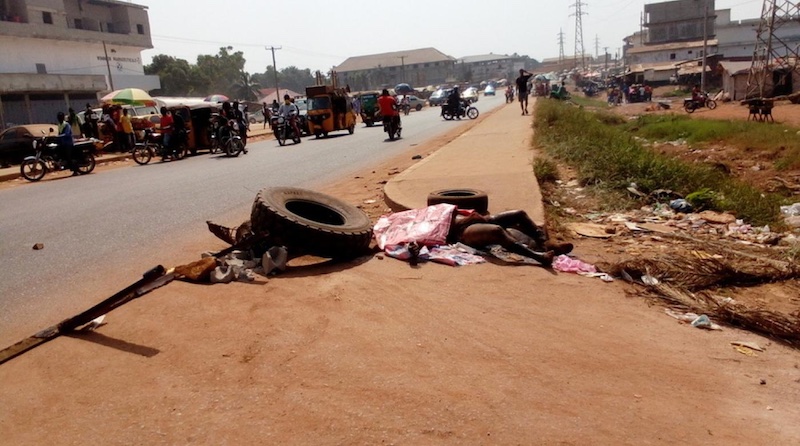 Several residents and business owners along the Cocoa Factory and Morris Farm Communities in Paynesville set a roadblock for hours on Wednesday, January 4, to call on the government to remove a dead body that has been there for four days.

According to Lusine Kromah, head of the disenchanted group, the odor from the rotting body is making the environment uncomfortable for them, hence their call on the government to remove the body.

Kormah, who sells electronic devices in his shop, is not a resident of the area. He lives in the Soul Clinic community. Quoting eyewitnesses, Kromah said people who were present when the incident took place said the deceased, along with three boys, were riding a bike on watch night — New Year’s Eve, December 31, 2022—and they snatched a lady’s phone. While escaping, they fell to the ground, the two guys managed to escape, and an angry crowd killed the alleged criminal, leaving him on the spot.

“Around 2 a.m., people were coming from a night watch, and three guys on a motorcycle jerked the phone from the person. While escaping with the phone to reach on the [main road], they fell and the two escaped. That was how the angry crowd came around and beat him, but he was still breathing. The police even came around and opened fire,” he said.

He said the police only came on the scene to disperse the crowd, but refused to take the man to the hospital, and, now that he’s dead, they have failed to collect his body.

There has been a long running debate between the Liberia National Police (LNP), the Ministry of Health (MOH), and the Monrovia City Corporation (MCC) over who is responsible for collecting public or abandoned dead bodies from the streets. Police spokesperson Moses Carter said the police are not responsible to take dead bodies from the street but the Monrovia City Corporation.

The roadblock crippled normal activities for hours, compelling public and private vehicle owners to use the Soul Clinic Road to get to Omega Market. Passengers had to disembark and walk to reach Omega to get on a bike, keh-keh or car to reach their respective destinations. 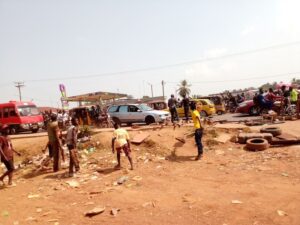 The body lies adjacent to the Coca Cola Bottling Company. From a distance, the deceased could be seen lying on the ground naked, covered with open split bags , with sore limbs, hands and feet.

“We are not even able to breathe well. This place has become very bad for us. We have our children here, and we have wells and hand pumps that we drink from, and this might affect us,” said Martha Tarr, a resident of the area. 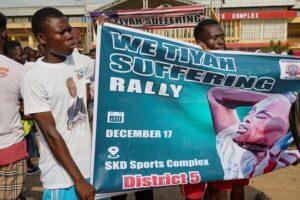