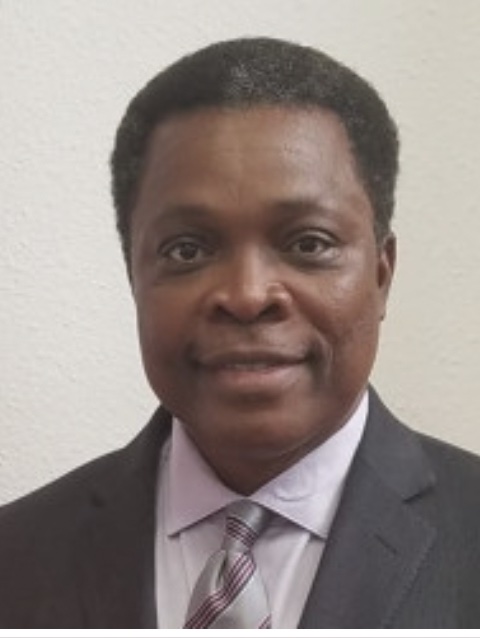 Daniel Blay Menyon was born on April 2, 1960, in the city of Tappita, Nimba County, Republic of Liberia. He was the fifth of eleven children born to Daisy Bopah Blaye. After the demise of his father, Samuel Blaye Boweh, young Daniel and his siblings were cared for by Reverend Dro Francis Menyon.

Daniel was raised and attended primary school in Gohzon, Morweh District, Rivercess County, Liberia and received his high school education at William V. S. Tubman High School in Sinkor, Monrovia. Daniel entered the workforce upon graduation from high school. He initially worked with the Daily Observer Newspaper. After that, he worked as a bank teller with the National Housing and Savings Bank in Monrovia, Liberia. In 1984, during his employment, the opportunity presented itself to immigrate to America where he pursued and earned his Bachelor’s and Master’s Degree in Business Administration.

While in college Daniel was introduced to the love of his life, Sonya Gizele Bell of San Diego, California. They married on June 13, 1987 and their union was blessed with two sons. Daniel worked with the California public schools system for 28 years as a Financial Administrator, overseeing the finances of multiple school districts until his retirement in 2019. He continued part-time as a financial consultant for many school districts throughout California up to the time of his passing.

Daniel was passionate about his family, his country of birth, and the pursuit of education. He greatly impacted the lives of friends, families and other individuals. For example, while on vacation in Liberia, Daniel encountered two children standing by the road who were expelled from grade school due to a lack of tuition fees. Daniel met the needs of those children by sponsoring their education each year through high school graduation. Years later, Daniel received a telephone call from one of those students who went on to become a medical doctor in England. He thanked Daniel for investing in his education early in his life. That spontaneous, compassionate act set Daniel on the path to pursuing the vision God gave him to provide access to modern educational resources for the children of Morweh. He founded and was the Chief Executive Officer of a non-profit organization, the Morweh Educational Development Foundation (MEDF). Through MEDF, and with the help of generous donors and members of the Foundation, he was able to finance and build two modern educational facilities in his hometown of Buen’s Town where the children currently have access to free education, uniforms and meals. These resources that were being provided resulted in the students of the Daisy Bopah Academy scoring the highest percentage nationwide on the recent West African Examination Council (WAEC) of Liberia. His selfless work has impacted the lives of many children in Liberia, and has inspired individuals from nations throughout the world. He humbly gave all glory and honor to the Lord God Almighty for using him in this work.

Daniel dedicated his life as a servant of God in His kingdom. He was licensed and ordained to preach the gospel of Jesus Christ and he lived an exemplary life of integrity. He loved to talk…whether it was sharing his faith, discussing current events, politics or history. He had a great sense of humor and a genuine concern for his fellowman. Daniel was a devoted member of Bethel Baptist Church of San Diego, California for 37 years under the leadership of Dr. John W. Ringgold. His life was a testimony to what God can do through His humble servants.

On September 8, 2022, Daniel Blay Menyon was called home from labor to eternal rest. He was preceded in death by his parents, two sisters, Sarah Blaye and Marie Brown, and one brother, James Blaye. He leaves to cherish his memory his wife of 35 years, Sonya Menyon; two sons, Jonathan Menyon and David Menyon (Kayla) of San Diego, CA; two grandchildren, Sage and Kora; six sisters, Nengan and Viola Menyon of Liberia, Magdalene Blaye and Mae Blaye Kinnay of Renton, WA, Joanna Tarr Zonwean (Henry) and Vera Menyon Weah (Jeff) of Colorado Springs, CO; three brothers, David R. Blaye of Liberia, Andrew B. Menyon (Musu) and Blojay Storther (Linda) of Denver, CO; and a host of nieces, nephews, cousins, in-laws, and numerous church family and friends who loved him deeply and will miss him dearly.