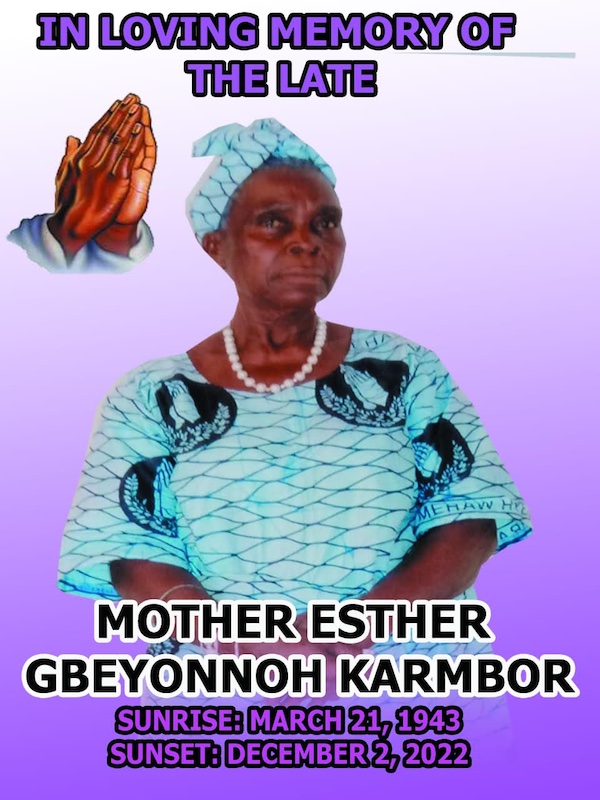 Time is too slow for those that wait; too swift for those that fear, too long for those that grieve; go and run free with the angels; we’re only imagining you dancing around the golden clouds; for the Lord – the God whom you served during your earthly journey, has chosen you to be with him and we feel nothing, but proud about your triumphant transition to be with your “King”. Although the good old Lord has taken you away from us; your memory will never escape our minds, but it has made us to continuously feel glad for the glorious times we spent together with you, here, on earth. Even more amazing, to us, is the feeling deeper down within the reservoir of our memory, which is centered around the precious memories you’ve left with us; in a special way. Go and run free with the angels, as they sing so tenderly and, please, be sure, to tell them, to take good care of you, for us; now that you, our prayer warrior, has left this suffering world forever!

With profound sadness and heavy hearts, the Karmbor, Doryen, Bartekwa, Wahpoe, Doe, Myers and Seekie families announce, with deepest regret, the passing of our Matriarch, Madam Esther Gbeyonnoh Karmbor, also known as Karmbo-Gbeyonnoh and Granny; in her 79th year. She was married to the late Mr. John Nagbe Nyanfoh Doryen, from Sasstown, Grand Kru County, Liberia, for over 20 years. Madam Esther Gbeyonnoh Karmbor was a lifelong member of the United Methodist Church, and worshipped at the Doe Juah United Methodist Church.

This sad event occurred, peacefully, on December 2, 2022, at her residence in the Battery Factory Community’s Neighborhood of Gardnersville, Monrovia-Liberia.

Final Funeral Arrangements Over the Remain the late, Madam Esther Gbeyonnoh Karmbor, are as follows:

Traditional Wake-keeping/Memories-Shares will be held at her residence in the Battery Factory Community (Opposite the Football Field), Gardnerville, on Friday January 20, 2023, starting at: 7:00PM.

Madam Esther Gbeyonnoh Karmbor’s body will be removed, from the Maureen Capehart Funeral Home in Caldwell, Montserrado County, on Saturday January 21, 2023, at 8:30AM and taken to the Doe Juah Memorial United Methodist Church, JJY, Gardnerville for a viewing, which will be followed by the Wake-keeping Services that starts from 9:30AM.

The Official Funeral Services will begin at 11:00 AM, on Saturday, January 21, 2023 (immediately after the Wake-keeping Services), at the same venue (Doe Juah Memorial United Methodist Church).

Burial Services will take place in Kebba, Barnesville, (immediately after the Funeral Services).