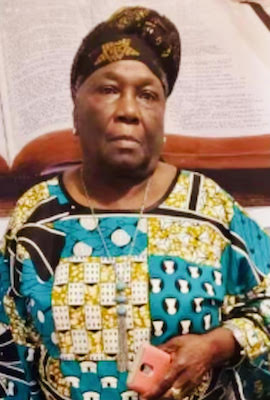 Mother Mabel Koon was born unto the union of Mr. Robert Y. Koon and Mardia Koon. She was born in Montserrado county in the city of Monrovia January 7, 1946. She attended the Demonstration Elementary school and the Saint Theresa convent school in Monrovia Liberia. Mother Mabel Koon successfully became a small business woman by which means she was able to support her children.

Mother Koon is survived by 15 grandchildren and 11 great grandchildren. She also successfully raised 6 children in Monrovia. Ma Mabel Koon had 3 sisters, one brother and herself making them 5 children. Two deceased including herself makes 3 therefore left behind 2 sisters. Names are Josephine Koon of the United States and Hellen Koon Sinneh of Liberia west Africa.

Ma Mabel Koon for the most part of her life lived on Camp Johnson road in her family home. One common hobby of Mabel Koon was to prepare a great meal, feed her children and the neighborhood. This was a daily practice after she cooked. She would spread the ditches on the kitchen floor and take-out food for her family, friends, and the community.

Mother Mabel Koon was a committed and devoted born again Christian, she was a member of the Eliza Turner Memorial A.M.E. church on-Camp Johnson road. Ma Mabel traveled to the united states of America in 2017 to rejoin her daughter Fatu Williams who is a citizen of the United States of America.

She then became a member of her daughter’s church Grace Tabernacle Outreach Int’l Ministries where she continued to serve and worship the Lord Jesus Christ. She was faithful in paying her tithes and offerings supporting the pastoral vision of the church. Mother Koon established a new family with members of the church in the city of Providence Rhode Island. Ma Mabel became a mother to all and was on the phone daily speaking with family members abroad.

Finally, Ma Mabel on December 31, 2020 awoke at 4:23 am to talk with her granddaughter Dee girl from Liberia. After the call she went into the bathroom to freshen up and take a shower. She got dressed and sat down on the bed. She then asks her granddaughter Tracy what time is it ? and Tracy said it is 5:04 am. Ma Mabel responded, “ ooh I thought it was 6:00 o clock am because I have to go home by 6:00.” Then she went back to bed and did not wake up again. She was later pronounced dead at Roger Williams hospital. We will miss our mother, but she is in the arms of the LORD Jesus Christ. Amen !