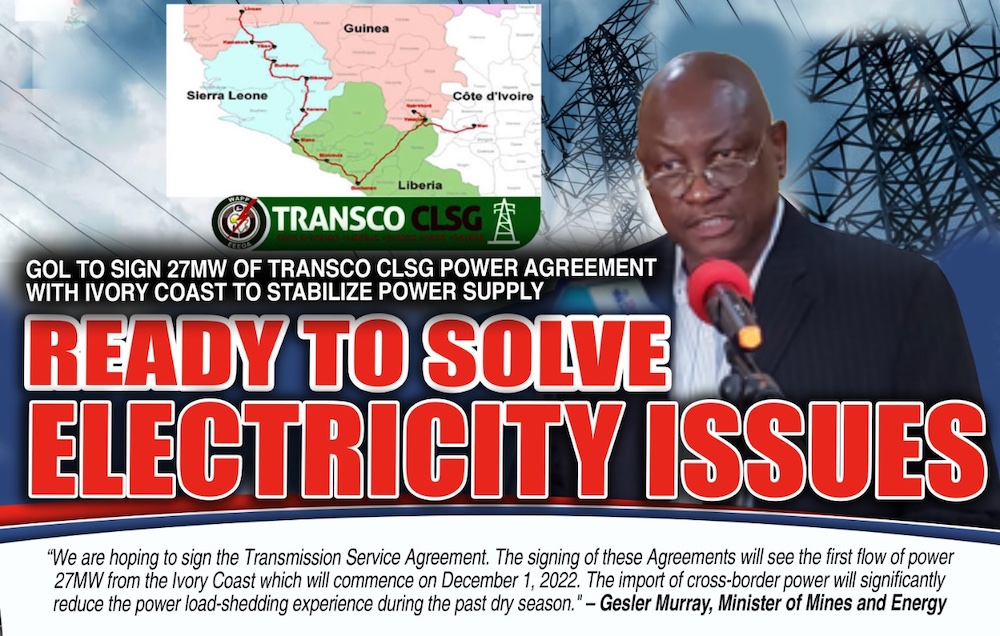 Monrovia – The Minister of Mines and Energy Gesler E. Murray has disclosed that the Management of the Liberia Electricity Corporation (LEC) has concluded the negotiations with La Cote d’Ivoire for electricity through the TRANSCO CLSG Transmission Line.

He said the government along with its development partners are bent on ensuring that citizens enjoy uninterrupted electricity supply during the dry season as they do now in the raining season.

Minister Murray added: “Therefore, I, your humble servant Gesler E. Murray along with the Chairman and Acting CEO of the LEC Honorable Monie R. Captan will lead a government of Liberia delegation to the Ivory Coast for the signing of the Power Purchase Agreement with CI Energies on October 21 2022.

He said: “We are also hoping to sign the Transmission Service Agreement while on this same mission. The signing of these Agreements will see the first flow of power 27MW from the Ivory Coast which will commence on December 1, 2022. The import of cross border power will significantly reduce the power load shedding experience during the past dry season.”

In July, the Management of TRANSCO CLSG applauded the Liberian Government’s decision to allocate US$14 million through the recast budget for 2022 towards efforts to improve access to stable and affordable electricity in the country.

According to TRANSCO, the appropriation would affect the necessary commercial agreements including the Power Purchase Agreement (PPA) with Cote d’Ivoire and the Transmission Service Agreement with TRANSCO CLSG, which will pave the way for the delivery of light to millions of Liberians who are patiently awaiting the electricity.

The Republic of Liberia is an integral partner in the TRANSCO CLSG process. Of the 1, 303km of high voltage transmission line that runs from Man in Cote d’Ivoire, 537km of this line passes through Liberia with five stations in Yekepa, Botota, Buchanan, Monrovia, and Mano. Four of the five substations, except Botota have been completed, energized and ready to serve.

Addressing the dry season power outage that the country had experienced over the past years; the Minister said the government is embarking on preparation to address what he termed as the “dry season generation gap”.

The operation, Mr. Murray stressed, will touch the repairing of equipment, procurements and adequate power supply around the country.

“The intervention to address the dry season gap will include but not be limited to, CLSG electricity supply, repair of Bushrod Thermal Plant generators, procurement of HFO and LFO for these thermal generators, and repair of the damaged Turbine Unit at the Mount Coffee Hydro Power Plant,” Minister Murray said.

The Minister of Mine and Energy said that the government is preparing for the Christmas Season with a focus on the replacement of approximately 65 damaged transformers in and around Monrovia.

The project, according to the Mines and Energies Minister, will restore electricity to many communities in and around Monrovia that have been out of service for a long period.

“We are also deploying 25,000 meters between now and the end of the year to ensure that most customers are metered and paying for their electricity consumption,” Minister Murray said.

Adding up, the Minister said the transmission and distribution project for the Roberts International Airport’s corridor will be completed by the end of the year.

He furthers that LEC has expanded its network and is currently providing electricity to Margibi, Bomi, Cape Mount, and Bong Counties.

Minister Murray continues: “The new connections are expected to reach 200,000 by the end of 2022. Maryland, Grand Gedeh, and Bong counties were already on the cross-border grid and will all soon be under a franchise arrangement.”

There have been lots of reports about power thieves in and around Monrovia. However, Minister Murray said LEC has a commercial loss rate of 50 percent.

Such a loss rate he says is not substantial adding that it undermines the effort to achieve commercial sustainability.

“The key activities to reduce commercial losses are the metering of all customers, including retrofitting post-paid meters to prepaid metering, enforcement of power theft law, and responsiveness to customer complaints,” Mr. Murray said.

He added: “Regular monitoring and disconnection of customers and ease of customers’ connections through efficient processes and workflows.”