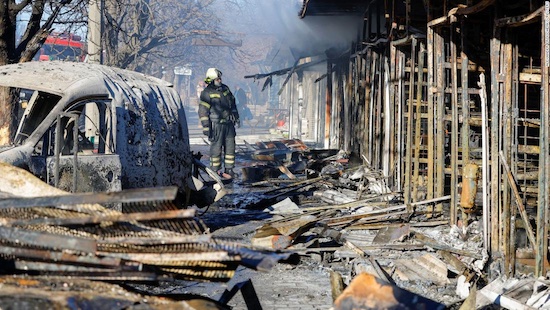 One cannot seem to escape the field of “smartness” these days and it is obvious that the goal of the smart revolution is problem solving: keeping families connected in creative and efficient ways, adding convenience and comfort to life, improving healthcare and the sciences and other aspects of life benefiting from this unique ingenuity.

With the Christmas holidays upon us, many people are exercising their choices for newer smart gadgets while on the contrary, millions are suffering from the effects of smart weapons leaving them homeless, exposed to brutal, extreme temperatures and other elements, and in the undesired cases, leaving many dead.

The question then is, if man has become so smart, why should we still have battlefields? Should not words like war and battlefield become obsolete by now? In my opinion, it should sound primitive to talk about war in this modern day and age. And this is why I think that way: for the most part, wars were fought for reasons such as territorial gains, imperialism and sometimes just mere ego.

How can the intelligent modern man still resort to war as a means of solving problems?

Almost twenty years ago the United States military bombed Iraq for weapons of mass destruction (WMDs) and up to now there is no evidence of such WMDs anywhere in that historic country. Putin’s Russia is now bombing Ukraine for what I see as a preemptive strike for fear of that nation joining NATO, which he believes will deploy missiles at his doorsteps. If every strong country with a big bomb indiscriminately bomb weaker countries due to unsubstantiated reasons, can we still boast of a smart world where problem solving is a coveted goal?

In the primitive world it was all about the strong conquering the weak. There were no checks and balances of rulers who were mostly kings, a pedigree of people who were revered as demi god. They could send young men on the battlefields to die for foolish and selfish causes without answering to their citizens. On the other hand, here is our world today where it should not be about the strong and the weak anymore. Yes, the days of the strong and weak were the days of the gladiators instead; our modern world is about the fast consuming the slow in all things technology. We are talking about the fastest Wi-Fi and we are talking about 5G connectivity, with all gear towards speedily and efficiently solving problems faced by humanity to make life better. With such a pace of human development, war becomes a complete antithesis to technological advancement and human progress.

And for our most talked about current event, the ongoing crisis in Ukraine showcases my emphasis that war is primitive: within ten months, more than eight millions people have become refugees, almost seven thousands civilians killed, immense sufferings of people especially women and children, and modern infrastructures brought down to stone age relics without any electricity and running water in most parts of what was just a developed country a little over 300 days ago. How does this grim outcome represent human solutions?

The speed and accuracy of smart weapon systems used on the modern battlefields have far more destructive potential in the shortest possible time than all of their predecessors combined. This kind of potential for destruction alone should give man a choice as to how he wants to pursue his smart world agenda – smart systems for good or for evil?

While Putin is using his big and smart bombs to destroy lives and separate families, Elon Musk is using his smart technology (Starlink) to keep families connected in that region by providing internet coverage. This illustrates that it is always a choice as to how man pursues his smart world agenda.

The post-World War II era has witnessed the formation of many civilized organizations with the key amongst them being the United Nations whose primary function, in summary, is to ensure that nations cordially exist with one another by maintaining peace and amicably settling disputes. Member countries of the United Nations sign treaties and the last I checked, a person’s signature binds him to the terms and conditions to whatever documents it is affixed. Russia is a member state of the United Nations.

Other organizations like the Norwegian Nobel Committee and newer ones like the Mo Ibrahim Foundation give awards and money to people for peace, medicine, the sciences, leadership, etcetera. In short, these organizations recognize people for doing good things. How then can a world be on such a positive trajectory while at the same time be involved with wars?

Is the modern man saying that his quest for smart development does not affect the ballooning of his ego for destruction? If this is the case where his ego will continue to destroy the works of his hands, the modern man will need to pause and find a remedy that ensures a “smart ego” in order to preserve his smart world.