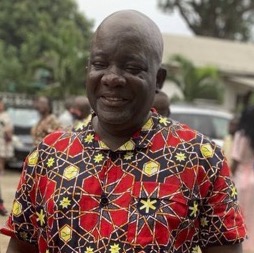 The Watson, Baxter, Adams, Brooks, Kollie, Luwemba, Reffell and Scott families announce with profound gratitude for a life filled with love, the transition of their beloved nephew, father, brother and cousin, James Adolphus Baxter, also known as “Oldpa”, which sadly occurred on Saturday, November 28, 2022, at St. Joseph Catholic Hospital, Sinkor, Liberia. In 1984, Oldpa graduated class valedictorian at AGM high school, Sinkor, Old Road: He later attended the Inter-African Electrical Engineering College in Abidjan in the 1980s before returning to Liberia where he obtained a Civil Engineering degree (magna cum laude) in 2001 from the University of Liberia. He is survived by his daughters, Jameselle, Albertina and Scholastica; his siblings: Albert, John-Lord and Wokie; his Aunt – Winifred Massa Luwenba, several cousins, nieces, nephews and friends in Liberia and abroad. Oldpa was preceded in death by both of his parents and adopted parents. May his soul rest in perfect peace and light perpetual shine on him��������