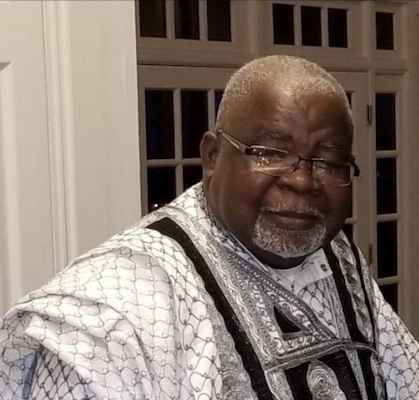 “We know that all things work together for good for those who love God, who are called according to his purpose”. Romans 8:28

We extend our heartfelt thanks and sincere appreciation to you for your calls, prayers, cards, words of encouragement and generous contributions, in our time of grieving.

BIRTH
Towards the end of the administration of the 17th President (Edwin J. Barclay) of Liberia, West Africa, something unique occurred in the Family of Kpana Dehmue and Ma Korto. On October 23, 1941 they were blessed with their first Child, later to be called Joseph Dehmue Kpana, in the town of Marwuah, in Fuamah District, Bong County, Liberia. Little did they know that their first son was destined for greatness. He was raised by his aunt Kenemassah and uncle Samie Jordan.

EDUCATION
“Sorporlor”, meaning “Old man” in the Liberian Kpelle Language, as our beloved father, husband, uncle, and brother was affectionately called by his family members, began his primary education at Kpolopele (House of Bread) Lutheran Mission near Marwuah. He was then sent to the Totota Lutheran Mission in Lower Bong County, where he completed his Junior High School education. Not satisfied with the knowledge acquired, Joseph Dehmue Kpana matriculated to the Booker Washington Institute (BWI) in Kakata, Liberia, where he earned his secondary education, with emphasis in the technical area of Electricity. He graduated with Honor in 1963. Not satisfied with his level of training, Uncle Joe benefited from a scholarship to pursue advanced studies in the field of Electricity at a Technical College in Lebanon, the Middle East, in 1964. He spent a year in Lebanon where he got an opportunity to travel to the United States of America in 1965, and landed safely in the city of New York. While in New York, Joe Kpana acquired more advanced training in his field of Electricity, which was his passion.

CAREER, FAMILY, AND RELIGIOUS LIFE
Our father, husband, uncle, and brother, Joseph Dehmue Kpana, began his career as a Professional Electrician when he worked with Hon. George Cooper at the Liberian Consulate in New York for several years. Later, he continued his career in California, and at the University of Maryland in Baltimore. Earlier, while in New York, Joe Kpana began to build his family. He finally met the love of his life, Magdalen, in Baltimore. They got married on October 24, 1992. Uncle Joe was a member of the Lutheran Church of the Holy Comforter in Baltimore. Following a robust professional career, Uncle Joe officially retired in 2008 from the University of Maryland Medical Center.

FINAL YEARS
Joseph, lovingly known to family and friends as “Joe”, lived with his family in Baltimore, Maryland for many years after his retirement. Joe lived a plentiful life filled with close friends, cousins, brothers, and sisters. He enjoyed watching movies, good music, dancing, fixing things for friends and family, and a healthy plate of African food. His family meant more to him than anything else in the world. He often spoke of them and made sure he kept in touch with those he loved. He was unendingly proud of all his girls and grandchildren. He would always greet everyone with a smile and genuinely seemed happy to see them. Joe will be greatly missed for his smiles. In early January this year, he fell ill and was admitted at the Johns Hopkins Hospital, Bayview Center. Sadly, he went to be with the Lord Jesus Christ on February 16, 2021, at 2:21 p.m. He was predeceased by his parents: Korto and Dehmue; siblings: Yarkpai, Kollie, Larmii, and Moopolu, and cousin, Sam Keller. He is survived by his widow, Magdalen T. Kpana; his daughters: Monica, Jennifer, Lydia (Dana), Lilaah (Joshua), Korta, and Jothel; his sons: Anthony and Milton; his grandchildren: Xavier (Diana), Jabari, Miles, Jelani, Mekhi, Kemari, Kharon, Khori, Jace; brother, Karbo; his close cousins: Benjamin Jordan, Joe Keller, Martha Traub, Jane Keller, Thelma, MaeGene, Juanita, Emmanuel, Amos Keller, Robert Clarke, Sr., , and Geoffrey Brewer, and a host of families and friends, who loved him dearly. May his soul rest in perfect peace!