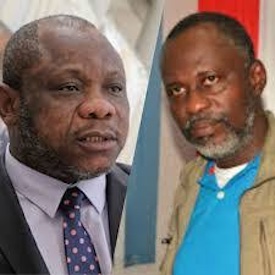 —-Labels Them  as “Criminals”

Monrovia: Wednesday afternoon was one of the terrible moments for both Finance and Development Ministers Samuel Tweh and closest colleague Nathaniel Mcgill, Minister of State for Presidential Affairs, when angry students chased them out off the premises of the State-run University of Liberia.

According to the angry students, the pairs are extremely ‘corrupt public officials’ that should not be permitted consciousness of the Liberia society.

The incident begun minutes following the arrival of the two Ministers on the main campus of the University of Liberia, in an apparent intend to inspect ongoing roads rehabilitation,  when crowd of students marching towards them chanting SUP revolutionary slogans.

The two ministers were labeled as thieves, through slogans chanted by the group of students from SUP, asking the ministers to leave the campus immediately.

The two Ministers are being accused by the students for the backwardness of the University, claims the pairs have repeatedly denied.