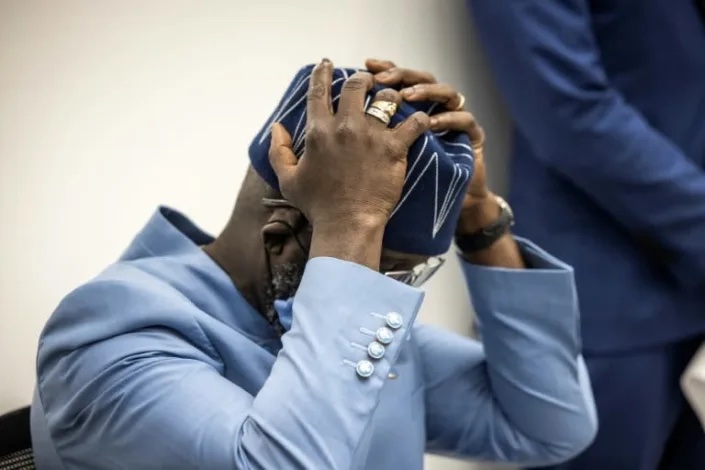 Liberian President George Weah is facing a backlash over his handling of corruption accusations made by the United States against three of his close allies.

Washington imposed sanctions on top officials including Liberia’s chief prosecutor and Weah’s chief of staff earlier this month over corruption allegations tied to multi-million-dollar contracts and at least $1.5 million in diverted public funds.

Weah — a former football star — suspended the officials, but the affair has continued to dominate headlines in the West African nation, threatening his support ahead of next year’s election.

Opposition leaders and human rights groups are demanding the officials’ dismissal — and a wider corruption probe into other members of the government.

Alexander Cummings, the leader of the opposition ANC party, said the “mere suspension” of the officials was “not good enough… nor is it enough to exonerate the president from growing public impression of his participation” in the “high crimes”.

“This is not the time for bogus suspensions, coverups, and fake investigations,” he said.

“This should not be business as usual. Enough is enough,” the group said.

The former AC Milan, Chelsea and Manchester City star, who has been criticised for lacking political experience and formal education, has not directly commented on the allegations.

“President Weah views the allegations against the officials contained in the report as grave,” his office said.

Fighting corruption was one of Weah’s major commitments before taking office in 2018.

In his inaugural speech as president, he promised to prosecute corrupt officials “to the full extent of the law”.

But he has struggled to fulfil his election promise. In a 2022 report, the US State Department cited widespread and “pervasive government corruption” in Liberia as a constraint to investment and development.

On August 15, the US Treasury’s Office of Foreign Assets Control slapped sanctions on Nathaniel McGill, the Minister for Presidential Affairs who serves as chief of staff to the president, and two other senior officials.

It accused McGill of having “bribed business owners, received bribes from potential investors (and government office seekers), and accepted kickbacks for steering contracts to companies in which he has an interest”.

It said he misappropriated government assets “for his personal gain” and “organized warlords to threaten political rivals”.

Sayma Syrenius Cephus, Liberia’s solicitor general and chief prosecutor, is accused of having “developed close relationships with suspects of criminal investigations” and “received bribes from individuals in exchange for having their cases dropped”, including money laundering cases.

The head of the National Port Authority (NPA), Bill Twehway, “orchestrated the diversion” of $1.5 million in vessel storage funds into a private account, according to the US.

It said he “secretly formed a private company” to which he “unilaterally awarded” a contract.

McGill and Cephus have responded with letters to President Weah, with McGill denying some accusations and decrying others as “vague”.

Cephus said he rejected and denied all accusations.

With long historical links and a significant diaspora in the US, American authorities have played an important role in holding Liberians accountable both for corruption and crimes tied to the country’s two civil wars.

Given the strong relationship, the US actions are likely to have a real impact in Liberia.

The corruption accusations come just over a year ahead of Liberia’s presidential election, slated for October 10, 2023.

Facing criticism over his inaction on key election promises, Weah blames the lack of progress on the difficult situation he inherited from predecessors.

But Victor Bright, a political analyst, told AFP that until the sanctions were announced, the president had been “in good posture” compared to other potential candidates.

“Though the economy has been bad since his ascendancy to power, he has been doing some infrastructural developments that have not passed unnoticed,” Bright said.

He said Weah should dismiss the officials in order to put the issue to bed.

“President Weah needs to listen to the voice of the masses if he does not want to lose some of his potential voters,” he said.