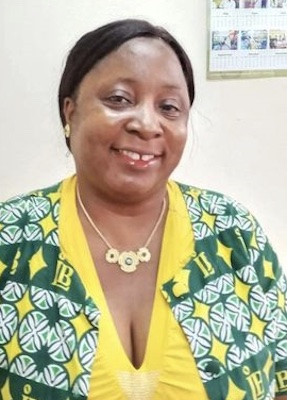 As an offspring of the Gbarbea and Gonoe families, Mrs. Gorma Gbarbea Kweh was born unto the blessed union of Mr. James Y. Gbarbea Sr. and Ms. Mary Gonoe in Bong Mines, Bong County on July 2nd, 1973. Both parents predeceased her.

The late Mrs. Gorma Gbarbea Kweh was raised by her mother Mary Gonoe and spent the majority of her adolescent years in Bong Mines, Bong County. She was brought up in a close knit family of five persons, a mother, two sisters and a brother. She took upon and adequately played the role of a big sister, which strengthened the bond among she and her twin sisters of Zina and the late Kona Gbarbea Dennis, who predeceased her in 2018. While in Bong Mines, a young and vibrant Gorma embraced the Christian religion at an early age and was a devoted member of the Holy Cross Lutheran Church. Upon moving to Monrovia, she became a member of the St. Andrew Lutheran Church. During her stay in Bong mines and Monrovia, she made lots of life-long friends and acquaintances, whose goodwill and attendance are exemplified during her home-going.

Academically, the late Mrs. Gorma Gbarbea – Kweh attended the Bong Town School, in Bong Mines. As she grew older, she spent the remainder of her high school days at SDA High School on Camp Johnson Road in Monrovia. She was an outstanding and decorated student at SDA before graduating.

Being a woman of substance, she quickly made it known that she was well ahead of her time and determined to create her own path. With a burning desire for success and an uncanny ability to take calculated risks, she initiated a bold step to enroll into the University of Liberia where she obtained a BBA in Management and with a Minor in Accountant.

It was during that time, while attending the University of Liberia, she met her one and only husband of 17 years Mr. James C. Kweh, Sr. She and James got married on March 27, 2010. She was a devoted and hardworking wife. She showed her husband unflinching love, care, respect and support. She stood and supported her husband in all his and their undertakings. She indeed exemplified the saying that behind every successful man stands a hardworking woman.

Their union was blessed with several children. She stood as a real mother to all her children and wards. She was a strong disciplinarian and a loving mother.

Mrs. Gorma Gbarbea Kweh worked for the Liberian bank for Development & Investment (LBDI) in 2008 as a Teller for a year. She later moved to the International Bank of Liberia (IBB) on March 2nd, 2009 as a Teller, a position she held for four years. She was later promoted to the position of Head Teller April 1, 2013, where her skills were always on full display. Her bosses after seeing her commitment and leadership ability, promoted her as Deputy Branch Manager on January 2, 2020 for their Sinkor branch, the position she held until her demise.

Gorma was towering family member in the Gbarbea, Kweh and Gonoe families. She showed a depth of love, care and concern for not only immediate family members, but to many persons including strangers. She will certainly be missed. Oh yes, we will miss her for the values she showed us:
– Showing love to everyone
– Treating everyone equally and with respect
– Being receptive to everyone
– Feeding the hungry

With the home-going of the late Mrs. Gorma Gbarbea Kweh, the family has lost a loving mother, sister and aunt; her employer, a dedicated employee, her friends, a trusted friend, and to all, a genuine and sincere person who would always give her all; and Liberia, a Patriot who always believe and care for her country.

This sad event occurred on Sunday, January 24, 2021, at the hour of 8:30 anti-meridian, at the St. Joseph Catholic Hospital, in Congo Town, Montserrado County, and Republic of Liberia.

Ma Gorma, we say “rest in peace”, we will truly miss you, uncle James says he loves you, Jeffrey and James Bond say they will always remember you and bye, bye mama. Tell grandpa, grandma, Bokey, Monu, Nuwoe and Kona, we love and will always miss them.