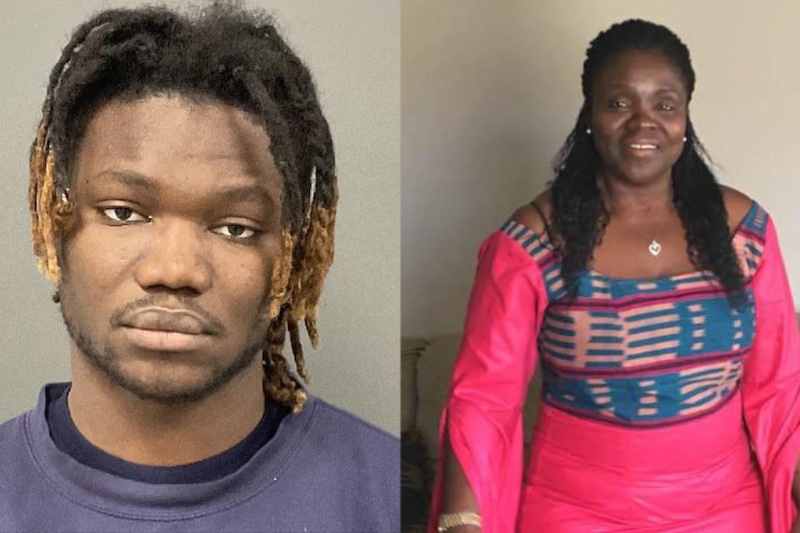 Court documents alleged that James Kollie Jr. threatened to kill his mother earlier in the week, but was released from jail 48 hours later. Police said late Friday he was arrested in Wahpeton, North Dakota.

Police took James Diawo Kollie Jr., 25, of Moorhead, into custody around 7:30 p.m. Friday, Dec. 2, in Wahpeton without incident, according to a late Friday news release from the Moorhead Police Department.

The arrest ended a manhunt launched after a woman’s body was found by family members before 11 p.m. Thursday at Kollie’s Moorhead home in the 3800 block of 32nd Street South.

Authorities haven’t identified the woman, but her family said she was Kollie’s mother, Receia Kollie.

The mother owned the home and allowed her son to live there with her.

James Kollie is being held at the Richland County Jail in Wahpeton and is awaiting extradition to Moorhead to face prosecution, the Moorhead Police Department said in a statement.

The agency didn’t say how the woman died, but there was no evidence a gun was used, Moorhead Police Capt. Deric Swenson said. The body had traumatic injuries, the Moorhead Police Department said in a news release.

The woman was last heard from Thursday evening, Swenson said. She was supposed to meet family that night, but she did not show up, he said.

That’s why a family friend went to check on her, Swenson said. They found her on the floor of the home, he added.

There was no sign of forced entry, according to police. Neighbors said they did not hear anything until police arrived in the neighborhood.

James Kollie had been accused in court of being violent toward family members.

Police responded the morning of Sunday, Nov. 27 to the same house for a domestic disturbance, according to court documents. During that incident, James Kollie threatened to kill his mother during a verbal argument, a criminal complaint alleged.

The argument didn’t turn physical, but the mother told police she was afraid of her son, the complaint said. He has a history of mental illness, the mother said in the complaint.

She told police she believed he could kill someone if he wanted to when his emotions are “volatile,” the complaint said.

The mother wanted James Kollie to go to the hospital to seek mental health help, but he refused, the complaint said. Law enforcement arrested the man and booked him into jail.

James Kollie appeared Tuesday in Clay County Court on a misdemeanor charge of domestic assault. Bond was set at $3,000, but Judge Leah duCharme allowed the defendant to be released without paying bond if he agreed to follow conditions set by the court.

That included not contacting his mother and staying a “reasonable distance” from his mother’s home. He was allowed to enter the home with a police escort, according to court records.

The Clay County Jail confirmed James Kollie was released Tuesday without paying bond, meaning he would have had to follow those pretrial conditions.

A message left for his court-appointed attorney, Michael Minard, was not returned on Friday.

Court records said James Kollie stabbed a bathroom door in a Fargo apartment at about 12:20 a.m. on June 15, 2020. His sister was in the bathroom at the time, a criminal complaint said.

He also threatened to kill his sister, according to the complaint.

Judge Susan Bailey sentenced James Kollie to two days in jail, which he already served while awaiting trial in the case.

The Moorhead Police Department said Friday morning that the woman who was found dead owned a black 2016 Honda Pilot with Minnesota plates that read HFE185. The vehicle has not been found, police said.

Authorities suspect James Kollie took the vehicle from his mother’s garage, according to a news release.

Anyone with information regarding the vehicle’s whereabouts is asked to call 911 or the Red River Regional Dispatch Center at 701-451-7660.

Relatives told the Moorhead Police Department that James Kollie Jr. is not related to Arthur Kollie Jr., Swenson said. Arthur Kollie was convicted of murder this year for attacking 14-year-old Jupiter Paulsen on June 4, 2021, in the Party City parking lot in Fargo.

A jury returned a guilty verdict on murder, robbery and aggravated assault charges in September after two hours of deliberation. Arthur Kollie was sentenced to life in prison in late October.

He filed a notice to appeal the conviction last week.