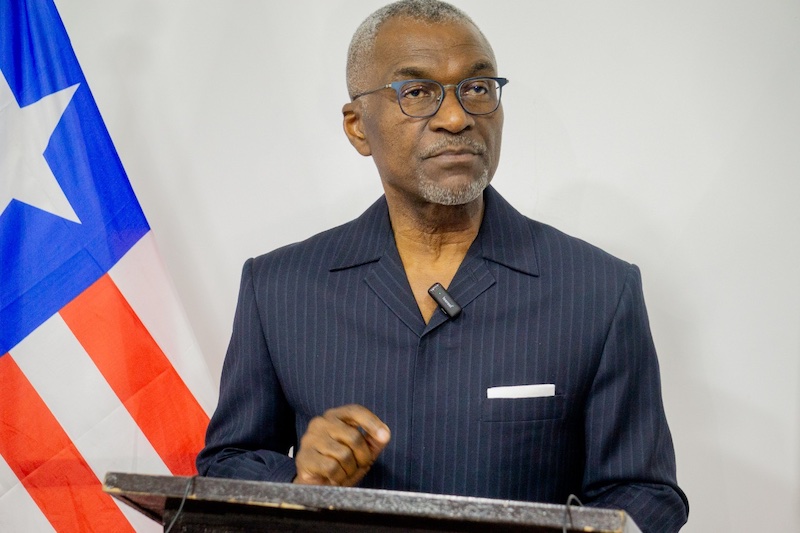 The Standard Bearer of the Collaborating Political Parties (CPP), Mr. Alexander Cummings has rejected claims that to solve Liberia’s century-old problems, one must have prior work experience in government.

Cummings said if government experience is what’s required, then, Liberia after 175 years, should have been one of the most developed countries by now.

He said all Liberia needs is someone who knows how to lead, how to manage and inspire people to deliver results.

Cummings said Liberia needs public servants who are honest, disciplined and prepared to work, as he has exemplified in his 40 years of enviable record at the multi-billion Coca-Cola Company.

He made reference to Mr. George Weah, who served three years in the Senate before becoming president, and many of his current officials who also served in previous administrations.

“The fact that this administration has performed so poorly shows that prior experience working in the government is not a necessary condition for national leadership,” the CPP Standard Bearer said.

“In fact, in some cases, it might even become a hindrance if people become too used to the culture of corruption and mismanagement that characterize much of our current administration,” he said.

Cummings said “I have managed people and highly successful teams all around the world. Achieving success in any leadership team requires a set of skills that I have mastered in my 40-plus career in business,” he said.

Cummings assured with certainty that a CPP Government can solve Liberia’s problems, noting that the challenges are many, and the road ahead is long, “but our collective will to succeed is stronger,” he said.

Cummings said in the coming months, he intends to travel to every county and district, every corner of Liberia to make his case to the Liberian people.

“We will sit with you, listen to you, learn from you, and share our own ideas with you on how we all can work together to create the better Liberia we all want,” he said in a statement released on January 2, 2023.

He said a CPP Government will tackle the most important issues to build a solid foundation for the future, by working with all Liberians from all backgrounds, regardless of ethnicity, religion, or gender, noting that

anyone who has what it takes, and is willing to work, we will work with you in the interest of Liberia.

Cummings said the Weah’s administration has done enough harm to Liberia, failing his constitutional responsibilities to the Liberian people.

He said this 2023 electioneering year is critical because our future and children depend on it, and that we should be asking ourselves, are our children, really in a position to become the best person they can be?

“Have we seen the kinds of investments in the education system to really prepare our children for the opportunities of this 21st century? Do parents have access to the kinds of jobs that will allow them to provide a decent livelihood for their children?” Cummings lamented.

The CPP Standard Bearer said, while we do not expect all of Liberia’s problems to be fixed within five years, Liberians expect to see forward momentum.

“We need to see basic systems in place. An economy that works for all Liberians. An equal opportunity for Liberian entrepreneurs to compete and to grow their businesses, in an environment that is totally dominated by foreign businesses,” he said.

Cummings said Liberians expect a health system that will provide reliable standard of care for the sick, noting that JFK Hospital should not turn patients away because they do not have money to pay upfront, or because the hospital does not have beds available.

Cummings spoke of the need to promptly pay civil servants better salaries as well also create opportunities for farmers to expand their farms and make money by being able to sell what they produced.

He emphasized the imperative need to provide youth with the critical skills needed to be on par with their peers in the region, with reference to 21st-century skills such as IT, computer programming and software engineering.

“How do we create an environment where our young people can have the resources and support needed to start their own businesses, and to grow those businesses, move from being job seekers to become job creators, Cummings said.

He said to create a wholesome functioning society is the primary reason for contesting the Presidency.

He said Liberia need serious people to fix the problems and meet challenges of nation building.

The CPP Standard Bearer said he has traveled throughout the country and has seen, the longing on the people’s faces for a better life, a government that will work for them, and not just focused on squeezing citizens’ pockets to collect taxes, but to use the state’s resources to create wealth for its citizens before taxing that wealth.

Cummings reacted to claims of his desperation for the Presidency, saying, “if you are a patriotic Liberian, you should be desperate too.”

The CPP Standard Bearer said he is desperate to see a Liberia where children aren’t out of school because their parents can’t afford it.

“Desperate for a future where parents don’t have to go through the pain of seeing their children going to bed hungry at night and where people don’t have to die of simple, preventable diseases,” he said.

Read the Original Article in the New Dawn Newspaper