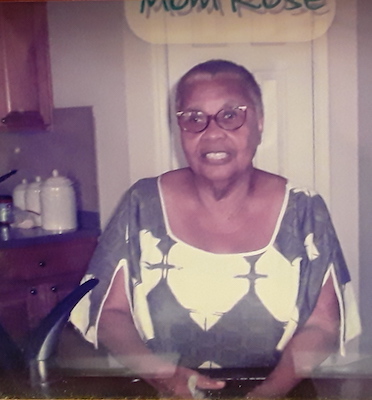 The Cummins and Lawrence families announce with profound sorrow the passing away of our dear daughter, mother, sister, and aunt Rev. Rose Elizabeth Cummins. This sad event occurred on Sunday, January 24th, 2021 at the hospital in Buchanan, Grand Bassa County, Liberia.

She was the only child of Sadie A. Cummins who was a magistrate in Grand Bassa County and the daughter of the late Van Theodore Cummins a well-respected Reverend in Grand Bassa County. Though her son Elbert Dunn predeceased her, she leaves to mourn her loss, her children Lilian (Rae) Lunter Taylor and Rhoney Lunter; her siblings, Amy Ba, Estelle Porte, Joan Gbenyon, Joseph Lawrence and Luis Lawrence, several grandchildren, great-grandchildren and a host of relatives and friends.

The funeral will be held on February 20th, 2021 at the United Methodist Church in Buchanan – viewing at 9 AM and service at 10 AM.

Rose Cummins worked with Jantzen for over 20 years, also with Raymond Concrete Works. She sang with the Greenwood Singers and she was the first woman elected to the Liberian Football Association.