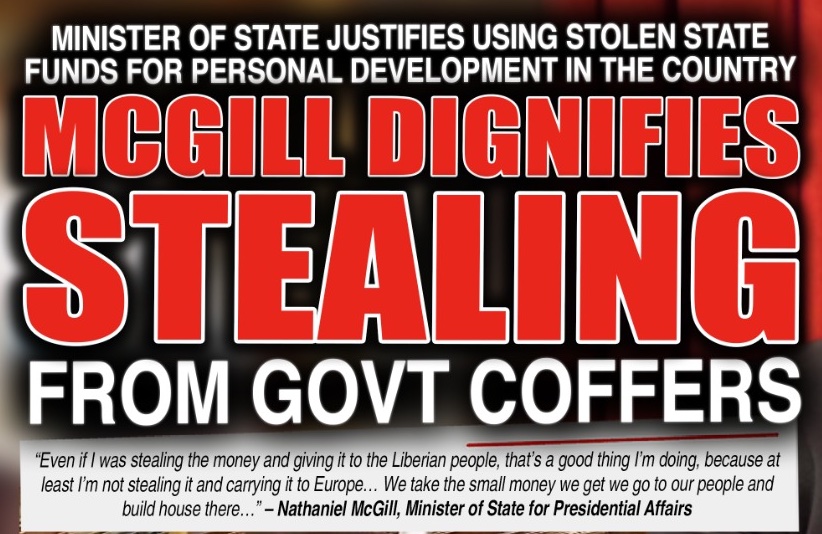 MONROVIA – For President George Weah’s Chief of Office Staff, Nathaniel McGill, looting the government’s coffers and investing the proceeds in personal infrastructural development is “a good thing” as long as those infrastructures are built here in Liberia.

Minister McGill made the disparaging comments over the weekend in Bong County.

He said, “..even if I was stealing the money and giving it to the Liberian people, that’s a good thing I’m doing, because at least I’m not stealing it and carrying it to Europe… We take the small money we get we go to our people and build house there…”

McGill argued that investing the “stolen” money here in Liberia will be beneficial to the citizens, especially the locals where the money was invested.

“So, I get the money, should I take it to Ghana? But if Bong County has the house, will I take it from here and carry it? The day God takes me, I’ll carry the house with me? Our grandchildren will come and say Bong County is looking fine,” he said.

Section 8.3 which speaks on Adherence to Budgetary and Financial Regulations states:

“Every Public Official and Employee of Government shall ensure that public resources entrusted to his or her care for the performance of duty are utilized judiciously and in accordance with budgetary appropriations and financial regulations. A Public Official or an Employee of Government who directs or concurs in the use of public funds contrary to the existing regulations or instructions shall be accountable and liable for any loss arising from that use and shall be required to make full restitution of the loss, even if he or she has ceased to be a public servant.”

Minister McGill’s reckless comments come in the wake of a staunch warning from an influential member of the ruling CDC, Dr. Lester Tenny, that current government officials risk being prosecuted over corruption by a new administration if President Weah is not reelected.

Owing to his proximity to President Weah, McGill’s comment may serve as an embarrassment for the President who has committed to, to among other things institute measures aimed at curbing graft during President’s Biden inaugural Democracy summit in 2021.

During the virtual event, the President promised to combat corruption, and promote openness and women’s participation in government, among others.

To review these promises, President Weah has been invited, along with several world leaders by Biden to Washington in December.

Over the weekend, he made a donation of L$1 million to the palm wine tappers association in Bong County.

In May, Minister Mc Gill led an array of officials in Bong County to raise L$25 million for the empowerment of women in the county.

“You know, to raise this L$25 million is very simple. Maybe our friends in the opposition don’t know. But I will explain to you how we are going to raise the money,” the Minister of State for Presidential Affairs emphasized.

Of late, Min. McGill has been seen spending some huge sums of money on scholarships in the name of President George Weah and promising more money to people across the country ahead of the 2023 elections.

It can be recalled that presidential hopeful Cllr. Tiawan Gongloe called on the United States government to place sanctions on Min. McGill for allegedly spending millions of Liberian dollars to buy voters ahead of the 2023 elections.

“We are calling on the U.S government to go beyond that. It was stated in the sanction statement [against Senator Prince Y. Johnson] that one of the reasons for the sanction against the honorable senator is that he has been selling votes but, for the market to be successful, there has to be the demand side.”

Cllr. Gongloe said though he could not state how much Min. McGill earns as monthly salary, he feels the scholarship scheme shows complete disregard for the feelings of the Liberian people who are suffering amid great hardship in the country.

Cllr. Gongloe alleged that Min. McGill has been obtaining the money through corrupt channels.