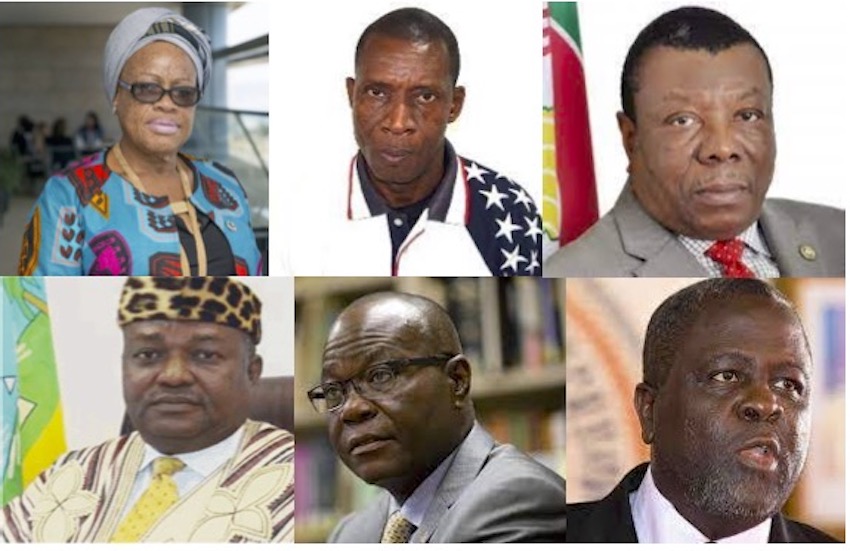 It has been an interesting few weeks in Liberia. For those of us that have been watching Liberian politics since the 90s, it feels very much like Déjà vu. It is often said that the route in politics is littered with broken relationships and strange bedfellows. This is playing itself out in Liberia currently.

With the 2023 election drawing closer, defections from one political party to the other have hit the political class. Liberian politicians are moving camps, divorcing and marrying new political suitors, and erecting new shades to ply their political trade.

Avalanche of individual politicians have recently decamped from one party to the other. The most astounding, was the mass defection of members of the national legislature from the former ruling Unity Party (UP), Alternative National Congress (ANC), and Liberty Party (LP) to the ruling Congress of Democratic Change (CDC), a constituent party of the ruling Coalition for Democratic Change (CDC) during the party’s 17th anniversary. Grand Cape Mount County Senator Simeon Taylor, in a rather surprising move, dumped the ANC of presidential hopeful Alexander Cummings and pitched his tent with the ruling CDC. Maryland County District #1 Representative UP member P. Mark Jurry and Grand Cape Mount County District #2, Representative Mambu Sonii of the LP also formally broke ranks with their respective parties. Representative Johnson Gwaikolo of Nimba’s District #9 and Sen. Gbleh-bo Brown (Independent) of Maryland County were among those lawmakers who joined the ruling CDC.

The Chairman of the Liberian People’s Party (at the time) Cllr. Joseph Kpator Jallah became a proxy candidate of the ruling Coalition for Democratic Change in the senatorial by-election in Lofa County and won; he also pitched his tent with the ruling CDC. Also, the ANC’s former vice Standard Bearer Ambassador Jeremiah C. Sulonteh officially joined the CDC.

The ruling Coalition of Democratic Change has also experienced its losses through defections. Dr. Toga G. McIntosh, a founding member of Charles Taylor’s National Patriotic Party (NPP) announced his support and pledged his allegiance to the Presidential bid of Mr. Alexander Cummings of the Alternative National Congress (ANC) who is now the standard bearer of the Collaborating Political Parties (CPP).

Previously, Dr. McIntosh broke ranks with the NPP and joined the Unity Party of Ellen Johnson Sirleaf, where he served as Minister for Planning and Economic Affairs, Foreign Minister and Vice President of the Economic Community of West African States (ECOWAS). Dr. McIntosh was once the presidential hopeful of the Unity Party for the 2017 presidential election. Dr. Toga Gayewea McIntosh later joined the Liberia People Democratic Party (LPDP). LPDP joined the Coalition of Democratic Change (CDC). After the coalition won the 2017 presidential election, Dr. McIntosh served as the Chairman of the Governing Council of the CDC.

There was also the defection of Ambassador Lewis Brown, a founding member of the National Patriotic Party and the ruling coalition. Ambassador Brown pledged his support to the presidential bid of opposition leader Alexander Cummings. During Charles Taylor’s dictatorial rule, Brown was the National Security Adviser and Adviser on Political and Domestic Affairs, between 1999 and 2001.

He also served as Minister of State for Presidential Affairs in 2002. In 2003, he was Minister for Foreign Affairs and Taylor’s government’s Chief Negotiator at the Accra Peace Talks. In 2011, Ambassador Lewis Brown assisted in forming the National Democratic Coalition (NDC) with Professor Dew Mason as its Standard Bearer. Brown served as Liberia’s Minister of Information between 2012 and 2016 and later was Liberia’s Permanent Representative of Liberia to the United Nations during the regime of Madam Sirleaf.

Such defections indeed would shake the foundation of any political party. However, it is not the first time defections are heating the Liberia polity. With 2023 fast approaching, it is normal for politicians to re-position themselves in a way that things will favor them. It happened in 2011 with mass defections from the then-opposition party CDC and Liberty Party to the then-ruling Unity Party. Now, the shift has reversed. The opposition is divided. Several heavyweights from the opposition had pulled out of the Collaborating Political Parties (CPP). The CPP was instrumental in the 2020 senatorial election. Today, mass defections have arguably destroyed the CPP.

So Why Do Liberian Politicians Bounce Between Political Parties?

Many have questioned the rationale and legality of the action, especially as it happens whenever general elections are coming closer. While many Liberians have lambasted politicians for defecting from one party to another, others say there is nothing wrong with the action, provided it is within the ambit of the law.

Many reasons have been proffered for these defections. Political parties in Liberia tend to lack ideologies and explicit messages that separate them from each other. Because of the country’s tribal, religious, and geographic divide, political parties are driven by personalities as opposed to ideologies. For example, in the United States, political parties are defined by their platforms, or manifestoes as they are called in Liberia. So, if a Democrat candidate comes knocking at your door, you have a sense of where he or she stands on the current critical issues.

When a politician defects, as they say in Liberia, he or she usually moves with hundreds or thousands of individuals, including officials of the party that he or she is leaving. While political parties are vessels to government and power all over the world, they are the main way to get into government in Liberia.  In politics, as it is often said, there are no permanent friends or enemies, only permanent interests. The line that separates one Liberian politician from the other is so thin that some Liberian politicians have practically traversed all political parties in a bid to satisfy their burning interests. By moving from one political party to the other, they make new friends with whom they share the same personal interests at the moment and not the country’s interests. For example, in 2017, 19 Liberian Senators pledged their support for Joseph Boakai’s 2017 Presidential Bid including Senator Albert Chie who somersaulted to Weah’s CDC after Weah won the presidency. Senator Albert Chie is now a member of the CDC and the Pro Tempore of the Liberian senate.

Defections, decamping and cross-carpeting have become the order of the day in Liberian politics. Irrespective of the word they use to describe their reasons, one thing remains the same, political prostitution is a politician’s second nature. Liberian politicians especially have perfected the art of hopping from one party to the other that Liberian politics has become a glorified game of jump rope. At this rate, every political party in Liberia might as well merge into one big association of fork-tongued traitors with no umbrella to hide under. They will, at last, be forced to deal with the chaos that they have created, with no opposition to blame or run to for refuge. Then they can fix their mistakes or give up power altogether.

In Liberia, politicians are perceived to always be after their selfish interests. They don’t have the interest of the common man at heart. This has been given as a reason for the gale of defections. Nobody decamped for the unpaid pensioner or for the teachers, health workers, soldiers, police, etc. who work for months without pay, and the litigant that cannot afford the cost of Justice. Nobody decamped for the children who beg to clean our windshields… See? Nobody decamped for them. Our politicians are fighting for their pockets and only God will deliver us from their hands. They want to satisfy themselves. It is not in the interest of Liberians.

From what we are seeing, it is obvious that politicians are in business. They are shameless people. They are not fighting for us, no plan for Liberia, and that is why they are fighting their way to the top. The defections are for selfish reasons, but if you ask them, they will say it is for the benefit of the masses. They are just playing games. They are migrating like rats running from one room to another and keep saying they are working for us. If you need to trust anyone, trust yourself first. Liberian politicians defect for the sake of proximity to power. The current defections and counter-defections of our politicians from one political party to another sadly confirm that our politicians are deeply corrupt and without ideology as previously stated. Most of them are in politics to sustain themselves with stolen money, but not to serve the electorates. How can we grow and develop as a nation?

Unfortunately, the youths whose future is being wantonly destroyed are in jubilation over this. God help Liberia. We are very clear in our minds and share the collective conviction that our present woes are a result of the collective failure of leadership by those who have been in the leadership of our country for decades and the establishment that has institutionalized support in their self-interest. Dogs eat their own vomit, but the main problem with defection is that the defector takes along with him the office he occupies by belonging to his former party. In another clime, the appropriate thing would be for decampees to resign from the offices they occupy before joining another political party. Hence, when a major political officeholder decamps from his party to the other, it becomes a huge issue that ends up affecting the entire polity. The consequences could sometimes threaten democracy.

What we are seeing today is not done in the interest of democracy. Liberia is a dynamic country with a growing population in West Africa. The citizens deserve parties that are not only generating answers to the country’s complex problems but are also engaging its citizens about the best way forward. When the citizens go to vote on October 10, 2023, we are hoping they will vote for the candidate and party that has put forth the best vision for the future of this country, not the recycled political goons.