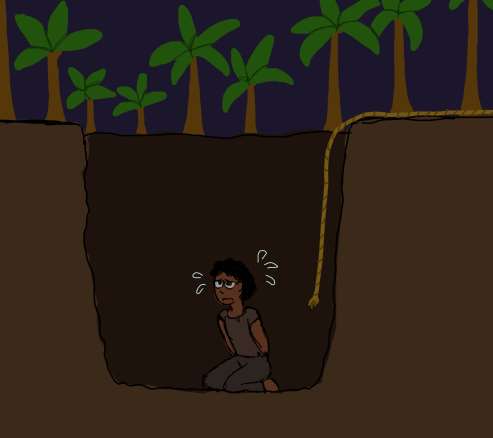 Everyone hated Bono in the Town of Totota, and they had many good reasons for this. He was always eager to talk and gossiped all the time. Bono was a gifted liar and sometimes would kiss the ground, swearing to the ancestors to claim truth, while telling a lie. He loved controversy, and if he saw someone leaving town on the day something went missing, he would claim that person took the missing item. More than once, he took things he fancied and falsely accused someone of taking it. He caused a lot of confusion by informing men, sometimes falsely, that their wives were cheating. On numerous occasions, he offered to be a witness in matters that he knew nothing about. Over the years, the people of Totota and his friends, if he had any, suffered a lot and prayed that something evil should happen to him. When no mishap or evil befell him, a group of his victims decided to turn the hands of fate. They were tired of all the trouble he created and secretly followed him when he went hunting—they attacked and overpowered him. One of the villagers could not suppress her anger and yelled, “We need to kill him now,” but the others did not agree. Another villager suggested, “We need to give him a slow death; let him suffer and regret the things he did to us before dying.” They took him to the remotest part of the forest and dug a deep pit. He was placed in the pit to die of hunger, thirst or wild animal attack, with his hands tightly bound. Bono stayed there several days and kept quiet. He feared drawing the attention of wild animals that could attack him since his hands were well secured. It was agonizing hearing the roaring lions, chattering birds and trumpeting elephants, and he became hungry and regretted all the wrong he had done to his friends and villagers. It was a stroke of luck on the fifth day when he heard human voices and began crying out in feeble voice for help. The three hunters who found him in the hole went to their village for ropes. They dropped the rope to him and asked him to hold on using his teeth since his hands were bound. He held on by biting into the rope, but just when almost completely out of the pit, Bono said, “Thank you,” and fell right back. One of the hunters shouted, “You need to learn to keep your mouth shut.” At last, Bono kept his mouth shut and was pulled out of the pit, and his binds were set loose. The hunters, who were from another town, returned to their town slowly since Bono was tired and weak and needed help along the way. While returning, Bono saw that the team had killed three antelopes but noticed they returned with only one. Not long after Bono rested, he was visited by the chief, who welcomed him and said it was unfortunate for anyone to experience such evil as was meted out to Bono by his fellow villagers. Bono thanked the chief profusely, glad to be alive. When the chief was leaving, Bono asked him if he knew the hunters had killed three antelopes. The chief said, “No, they killed one antelope.” He then told the chief he saw three antelopes, but it seemed the hunters were trying to avoid sharing as it was customary to share a portion of every hunt with the poor, sick and older people in the village. The chief left and confronted one of the hunters. “I learned your team actually killed three antelopes; why did you return with only one? I need to know if this is true,” said the chief. The hunter lied and explained that the other antelopes were not killed by the team, but he was angry and muttered, “We should have left this man in the hole; they had a reason for putting him there.” He could not believe that Bono, a man who had kissed their feet with tears of joy and thankfulness, would do this.

Lesson: Never say “thank you” too soon, or you may fall back where you came from.

Learn to keep your mouth shut and mind your business, or you could get hurt.

Do not bear false witness or be the bearer of lies.

It may seem harsh, but some people are best left to face the results of their actions.

(Excerpt from the Book, Laughter of a Crazy Man, ©2020 Michel Dioubate) 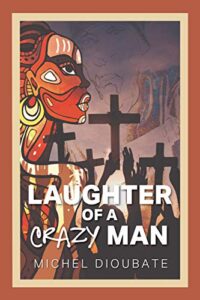 The Baboon and the Boy