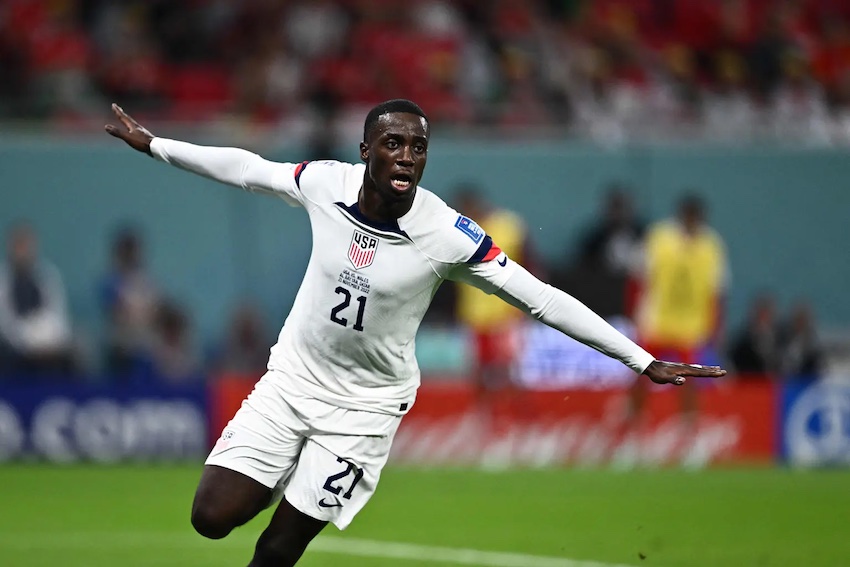 Timothy Weah’s father, George, is one of the only Ballon d’Or winners in history to never play at a World Cup. Currently the president of Liberia, George Weah’s heyday saw him dominate the top leagues in France and Italy, winning the award for the best soccer player in the world in 1995 and being widely considered one of the best African soccer players ever.

For the Weah family to get on the board in the biggest stage the sport has to offer, though, it fell to his son, Tim — born in Brooklyn, raised in Queens, playing for the United States.

That moment came in the 36th minute of Monday’s opening match for the U.S. Men’s National Team, which eventually finished as a 1-1 draw against Wales. Weah took a ball played in behind by Christian Pulisic and, cool as you like, finished the chance to give the Americans an early lead.

At age 22, the world is in front of Weah. Monday was his 27th cap for the national team. He’s also won three Ligue 1 titles in France, two with Paris Saint-Germain — the club his father played for — and a third with Lille, mostly in a bench role. Despite his pedigree, even playing at a World Cup is something he “never thought would happen,” Weah told ESPN in the lead-up to the tournament.

“When I was younger, I always believed I would reach the professional stage, but to represent your country at a World Cup is crazy,” Weah said. “I mean, it’s a dream come true. It’s something that a lot of good players haven’t been able to do and to have the opportunity to represent my country and my name is amazing. I feel blessed.”

Before coming off in the 88th minute on Monday, Weah provided the United States with a steady presence coming down the right side. The goal aside, he was one of the better players for the Americans in the starting 11 on a night where Pulisic didn’t quite have it, and in a group that lacks a consistent striker up front.

Though there were questions surrounding Gregg Berhalter failing to substitute Giovani Reyna up front, Weah at least proved deserving of inclusion against England on Friday in a game that the U.S. will need to get a result from to go into the final group stage match against Iran feeling comfortable.

“We have to be better in both halves,” Weah told reporters in Qatar following the 1-1 draw, in which Gareth Bale’s 81st minute penalty tied it for Wales. “They played five at the back which is difficult, and they did a great job.

“In a World Cup, the most important thing is not to lose. We kept it tight and now we focus on the next game when we will try and take it to the next step. We will keep working.”

The level-headed realism is the same demeanor Weah cast before the tournament.

“We had a lot of ups and downs in the qualifiers, and we can’t have that at this World Cup,” Weah told ESPN. “Everything has to be positive, from the way we defend to the way we attack. We just have to be perfect … the team has a lot of energy, a lot of young players who want it, we’re all hungry and we just have to apply it.”

Given the stage, Weah surely made his family proud.

Read the Original Article in the New York Post